Researchers at the Washington University School of Medicine, St. Louis, have identified areas of the brain which are activated in a variety of cognitive tasks, such as reading and analyzing pictures, and which may be 'executive' areas required for performing such tasks.

The planning and execution of any task involves the processing of information by multiple brain regions and circuits acting in parallel. Cognitive tasks require the brain to select and configure the appropriate data processing resources; a 'task set' controls the moment-to-moment processing of data involved in the execution of a particular task. 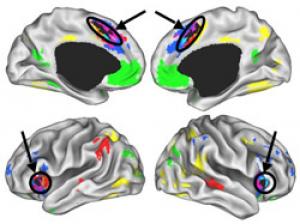 Using functional magnetic resonance imaging (fMRI), Nico Dosenbach and his colleagues have shown that the dorsal anterior cingulate cortex and operculum were consistently activiated when their 183 subjects began working on a cognitive task. The findings suggest that these areas are, effectively, the 'executives,' which determine the order in which the brain regions and circuits contributing to a particular task are activated during the execution of that task.

Both regions are located in the frontal lobes; the cingulate cortex is on the medial, or inner, surface (top two images in the figure on the left), and the operculum is near the bottom of the lateral, or outer, surface (bottom two images).

"We have been struggling to figure out what [the operculum] do[es]…and now these data suggest [it] may be involved in the creation of…a task set," says Professor Steven Petersen, senior author of the Neuron paper in which the findings are published.

Another region previously implicated in task set creation, the dorsolateral prefrontal cortex, was not activated as consistently as the cingulate cortices and opercula in the experiments, which were conducted over 5 years and generated a large set of data.

Support for the idea that the cingulate cortex is involved in creating task sets comes from studies of akinetic mutism, a condition occuring as a result of damage to the cingulate after a stroke or surgery. Patients with this condition "seem to have problems voluntarily entering a task state," says Dosenbach. "They can do tasks with very explicit instructions, but are much less proficient at what's called random generation tasks, such as coming up with random words."

There is, however, a caveat. Broca's area, which is involved in language processing and speech production, is found in the operculum, and most of the tasks performed by the participants in the study were language-related. According to Peterson, though, the same regions were activated even when participants performed non-linguistic tasks.