Researchers at the University of New Mexico have used a refined functional magnetic resonance imaging (fMRI) technique to observe the brain activity correlated with the thought of a single word.

Using newly developed techniques for collecting and analyzing fMRI data, Stefan Posse and his colleagues were able to watch activity in Broca’s area, one of the brain’s language centres, while subjects thought of a single word beginning with a letter which was flashed on a screen (left).

Posse and his colleagues obtained increased sensitivity by taking more images over a shorter time period, and new algorithms were used to integrate the images and reduce background noise.

Whereas most imaging studies involve collating the data obtained from multiple trials, Posse’s team could detect activity in the language area after a single trial. This activity could also be observed in real time; when subjects thought of two words instead of one, this would occasionally be detected as two distinct bursts of activity in Broca’s area.

Although the findings are yet to be confirmed, neuroimaging experts say they are promising. Posse hopes that the refined method will be used to investigate more complex cognitive processes.

“If you can see activity generated by a single word, maybe you can also see activity from a longer sequence of thoughts, then complex brain processes,” he says. “The idea is to be able to decompose the stream of thought processes into individual thoughts.”

At the U.S. Department of Energy’s Lawrence Berkeley National Laboratory, researchers are testing a laser-based MRI technique which may lead to the development of a cheap and compact scanning device.

“Our technique provides a viable alternative for MRI detection with substantially enhanced sensitivity and time resolution for various situations where traditional MRI is not optimal,” says Alexander Pines, who led the development of the new technique.

Using a method called atomic magnetometry, the magnetic signals produced by water molecules can be detected without the giant magnets or complex cooling systems used in conventional fMRI. The atomic magnetometer consists of a glass cylinder containing vapourized potassium atoms suspended in a gas. A pulse of laser light is used to align the spin of the potassium nuclei, which is then disturbed by the magnetic signals produced by the water molecules during the fMRI scan (see below for an explanation of how fMRI works).

“Our system is fundamentally simple and does not involve any single expensive component,” says Dmitri Budker, who developed the atomic magnetometer. “We anticipate that the whole apparatus will become quite compact and deployable as a battery-powered portable device.”

The giant magnets used in fMRI scanners have to be cooled to very low temperatures. Recently, superconducting quantum interference devices (SQUIDs) have been used in fMRI scanners to increase their sensitivity. SQUIDS must also be cooled to temperatures approaching absolute zero to function properly. Consequently, fMRI scanners are very expensive, costing around $1 million each. Because Pine’s technique is sensitive enough not to rely on giant supercooled magnets, and is based on simple electronics instead of SQUIDs, it does not require cryogenics, and can therefore provide similar sensitivity at a fraction of the cost.

“We are continuing to optimize our system, in both sensitivity and detection efficiency, to make this technique suitable for microfluidics and biological objects with sizes in the micrometer regime,” says Shoujun Xu, who is a member of Pines’ research group. “Further consolidation of the apparatus is underway so that the whole setup becomes portable and therefore can be conveniently utilized as an in-line analytical instrument for monitoring chemical reactions and biological processes.”

What is fMRI and how does it work?

It seems that the majority of brain research that makes the news headlines these days involves one neuroimaging technique or another. According to Paul Bloom, researchers, and the public, have been ‘seduced by the flickering lights of the brain.’ What exactly is fMRI, how does it work and can it really tell us as much about the brain as some people think it can?

fMRI is one of the newer neuroimaging techniques; it draws heavily on knowledge from many disciplines, especially statistics, psychology, neuroanatomy, electrophysiology and physics. fMRI is used to observe the neural correlates of behaviours and cognitive processes in healthy subjects. It is also providing neuroscientists with a better understanding of pathological conditions.

A conventional fMRI scanner (left) contains giant cylindrical supercooled magnets which produce a field some 50,000 times stronger than the Earth’s magnetic field, and can create three-dimensional maps of body tissue.

A typical fMRI experiment lasts 15-120 minutes and can therefore cause subjects to feel extremely claustrophobic. Subjects lie on a sliding table which is pushed into the scanner; subjects are usually restrained with a series of soft pads to prevent movements that might result in unusable data. Because of the strength of the magnetic field involved, subjects are required to remove all metallic objects from their person before being placed in the scanner.

fMRI measures the haemodynamic response of brain regions in response to specific stimuli or during the performance of a task. That is, it detects the changes in cerebral blood flow and the oxygenation of brain cells that is correlated to neural activity. The signal produced is referred to as blood oxygen level-dependent (BOLD). Neural activity can only be inferred from an image obtained by fMRI; the technique is, therefore, an indirect measure of the brain activity related to a given cognitive process. The exact relationship between blood flow to regions of the brain and the activation of those areas is not known.

MRI relies on the spin properties of atomic nuclei with unpaired protons or neutrons. This spin produces a magnetic moment so that each nucleus acts like a tiny bar magnet. The application of a strong magnetic field aligns the spins of hydrogen nuclei in the body’s water molecules. Radiofrequency waves are then used to perturb the spins of the nuclei; as the spins re-align to their preferred position, the nuclei ‘wobble,’ emitting an oscillating magnetic field in the process. It is this magnetism, as produced by water molecules in the blood, that is detected by fMRI. (The word ‘resonance’ denotes the interaction between the radiofrequency and the magnetic field.)

The raw data obtained from an fMRI experiment (left) require a mathematical transformation so that the images can be reconstructed in ‘real space.’ Further analyses, which correct for distortions and remove any effects that might have been produced by head movements, are performed using specialized computer software. These tools also enable researchers to make a comparison between the images obtained when a stimulus is switched off to those obtained when a stimulus is switched on, or those obtained before a subject performs a task to those obtained while the task is being performed. 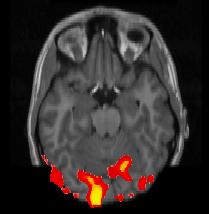 The final results are images of the brain containing coloured patches which correlate to the areas activated during the task performed by the subjects (right). These images can be calculated from any angle and rendered in three dimensions.

fMRI provides more detailed images of the brain than other similar techniques, and is now used routinely by physicians to monitor the growth of brain tumours and to diagnose other neurological conditions. Because of recent developments, the technique can also be used to detect the very early stages of cerebrovascular accidents, enabling doctors to provide effective treatments before irreversible damage has occurred.