If you’re in New York this weekend, you might like to go to the Wired NextFest , a “festival of innovative products and technologies that are transforming our world…[which] features more than 130 interactive exhibits from leading scientists and researchers”.

Some of these exhibits include: 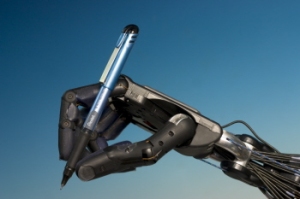 The closest robot Hand to the human Hand available….provides 24 movement, allowing a direct mapping from a human to the robot.
[It] has integrated sensing and position control, allowing precise control from off-board computers, or integration into your existing robot platform.

The Shadow Hand contains an integrated bank of 36 Air Muscles which make it move. The muscles are compliant, which allows the Hand to be used around soft or fragile objects.

The Hand can be fitted with touch sensing on the fingertips, offering sensitivity sufficient to detect a single small coin.

The Hybrid Assistive Limb (HAL) Robot Suit, developed in Japan by Cyberdyne Inc. and researchers at the Kanagawa Institute of Technology. 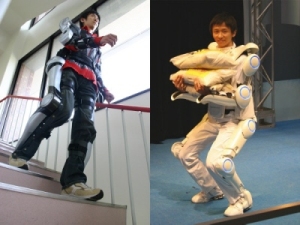 the motor drivers, measurement system, computer, wireless LAN, and power supply are built in the backpack.

[The suit has] hybrid control systems.. [for] autonomous…posture control…The comfortable power assist controller [is] based on biological feedback and predictive feedforward.

Finally, there’s the Brainball, a new game developed by the Interactive Institute’s Smart Studio in Oslo, Norway. It’s an interesting concept, but I’m not sure if it would be very exciting to watch: 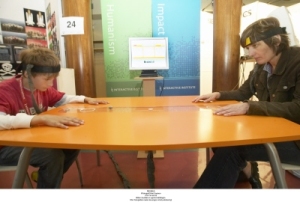 …participants are dependent on the body’s…reactions to the game machine…Both players wear a strap around their forehead that contains electrodes and is wired up to a biosensor system. This…registers the electrical activity in the brain…[which] is graphed …on a computer screen so that the public can follow the players mental processes during the match. [Alpha and theta ]waves…move the ball forward, increasing the chance of victory… [they] are generated in the brain when one is calm and relaxed. Brainball is an exciting and social game where the audience can follow the match by watching the ball on the table, the graph on the screens and the more or less relaxed expressions of the players.