Fear, that most primitive of emotions, is good, at least when it is kept under control. It is essential for survival, allowing an organism to detect a potential threat to its life. Too much fear, however, can lead to pathological conditions such as anxiety, phobia, paranoia, or post-traumatic stress disorder.

In recent years, neuroscientists have started to investigate the brain mechanisms underlying fear and other emotions. The neural circuitry which processes emotional information such as fear is well mapped, but, apart from some insight into the molecular basis of these mechanisms, little else is known. A greater understanding of the neural mechanisms of fear could lead to new treatments for various neuropsychiatric conditions.

Although the word fear is hard to define, everyone knows how it feels to be afraid. The physio- logical response to fear is called the ‘fight or flight’ response, or the ‘acute stress response’, and was first described by the American physiologist Walter B. Cannon in the 1929. The response is caused by the actions of adrenaline, noradrenaline and the steroid cortisol, whose release is triggered by the sympathetic branch of the autonomic nervous system: heart rate increases and breathing speeds up; pupils dilate to let in more light, enabling one to see better; metabolism of fat and glucose in the liver increase to provide the energy that might be needed to escape; production and release of endorphins is stepped-up; and the brain’s decision-making centres become primed for action.

Fear can broadly be characterized into two types. Conditioned fear is the process by which an insignificant and otherwise harmless stimulus becomes, by association, a sign of danger. The association between an innocuous stimulus and a fear response can easily be induced by classical conditioning, in which the stimulus is repeatedly associated with something scary, until the stimulus itself is feared. In contrast, unconditioned fear is not learnt, but, rather, is ‘instinctive’, and can be regarded as an evolutionary relic – we sometimes fear what our ancestors feared.

The amygdala is part of the limbic system, a complex set of structures that includes the thalamus (or “deep chamber”) the hippocampus, hypothalamus, and olfactory bulb. It is attached to the anterior of hippocampus, and is involved, among other things, in encoding and consolidating memories of fearful experiences. The amygdala receives its main inputs from the visual, auditory and somatosensory cortices; it couples these sensory stimuli (something scary) to the fight-or-flight response and, therefore, its main outputs are to the hypothalamus, which controls hormone production and homeostasis, and autonomic centres in the brainstem. 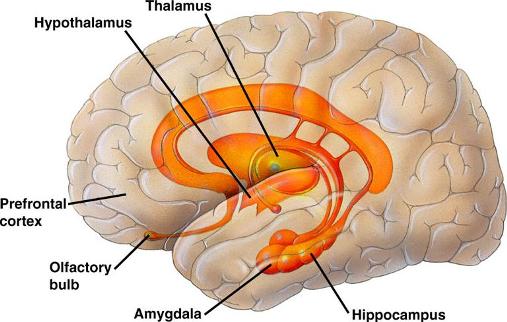 Recent work by Gleb Shumyatsky and his colleagues at Rutgers University in New Jersey has led to the discovery of several genes that are enriched in the amygdala and appear to be involved in the formation of fearful memories. One of these proteins, stathmin (also known as oncoprotein 18) is now known to be involved in mediating the formation of memories of of both conditioned and unconditioned fear; there is a high level of expression of the stathmin gene, and a corresponding high concentration of stathmin protein, in the amygdala, but not in the adjacent hippocampus.

Mutant mice lacking the stathmin gene were unable to learn new fears or to act instinctively in a fearful situation, i.e. they had weaker memories of fearful experiences. The stathmin knockout mice also showed less anxiety when presented with new mazes to explore or with potentially dangerous situations. Upon further examination, it was observed that mice lacking the stathmin gene had a less dynamic microtubule network than wild type (normal) mice. Memories are formed by the establishment of new synaptic connections, which require a re-arrangement of microtubules. In the absence of the stathmin protein, microtubules aren’t re-arranged so easily, and, as a consequence, the synapses that would normally be modified during memory formation are not as plastic as they should be.

More recently, researchers have used functional magnetic resonance imaging (fMRI) to show that the rostral anterior cingulate cortex(rACC) modulates activity in the amygdala, effectively acting as an ‘on-off’ switch. Joy Hirsch and her colleagues at Columbia University used a variant of the Stroop test, which involves presenting words for colours, which are printed in a colour that differs from that of the meaning of the word (e.g. green). This discrepancy leads to a delay in the processing of the visual information, reducing increasing the reaction time taken to perform the task.

When we are faced with fearful stimuli but know that we are not in danger, the fight or flight response produced by fear can be enjoyable. Hence, people enjoy taking part in extreme sports such as bungee jumping or sky-diving. This is also why some people enjoy watching horror films. The ability to enjoy fear enables us to try new activities, to explore novel environments, and to be daredevils. Although we have gained some understanding of the neural mechanisms underlying fear and other emotions, this understanding is very basic, and much remains to be discovered. Further insights into how the brain processes fearful information will provide new methods, both cognitive and pharmacological, for treating conditions in which fear has become pathological.

Here’s the 1922 film Nosferatu, the earliest surviving film adaptation of Bram Stoker’s Dracula. Put the film into full screen mode, sit back, and enjoy the fear! (The film is in the public domain and is not subject to copyright.)

3 thoughts on “The neurobiology of fear”