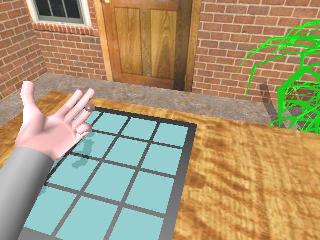 Researchers at the University of Manchester have developed a computer program which enables amputees to visualize their missing limbs. The  virtual reality system has proved to be effective in alleviating the pain associated with phantom limb syndrome, the sensation that a amputated  limb is still attached to the body.

Almost all amputees experience phantom limb syndrome. The condition is probably caused by the reorganization of the motor cortex after amputation; the sensations normally begin within days of amputation, and can persist for decades.

The term ‘phantom limb syndrome’ was coined by the American physician Silas Weir Mitchell in 1871, who described the phenomenon of post-amputation sensory “ghosts” while treating amputees during the American Civil War. The condition had been documented centuries earlier – it was first described in 1552 by the French army surgeon Ambroise Paré:

For the patients, long after the amputation is made, say they still feel pain in the amputated part. Of this they complain strongly, a thing worthy of wonder and almost incredible to people who have not experienced this.

Up to 80% of amputees also experience phantom limb pain, which is usually described as a severe cramping.Although, phantom limb pain is assumed to be associated with damage to neurons in the central or peripheral nervous system, its cause is mysterious, and most of the treatments for alleviating it – drugs, electrical stimulation of the brain or surgery – are ineffective.

The computer program, developed by the University of Manchester’s Advanced Interfaces Group, consists of a headset and data glove, and sensors that are fitted to the elbows, wrists, knees or ankles. This kit generates an immersive virtual reality environment in which amputees can visualize and move their missing limbs in three dimensions.

Three male and two female amputees, aged between 56-65, took part in the study, during which they used the VR system between 7 and 10 times, for 30 minutes at a time, over a 2-3 month period. This equipment was used to control the movements of the facsimiles of the amputees’ missing limbs in the virtual reality environment. Four out of the five amputees involved in the study reported reduced phantom limb pain almost immediately after learning to control their virtual limb.

According to Craig Murray, of the University of Manchester’s School of Psychological Sciences, who led the study, “One patient felt that the fingers of her amputated hand were continually clenched into her palm, which was very painful for her. However, after just one session using the virtual system she began to feel movement in her fingers and the pain began to ease.”

The program is based on previous work using the mirror box, a simple apparatus devised by V.S. Ramachandran, consisting of a mirror placed vertically inside a box. When an amputee places a limb in the box, the reflection of the limb occupies the space in which the amputated limb would normally be found. Amputees sometimes report that their phantom limb is paralyzed; Ramachandran obtained some evidence that the mirror box can enable amputees to gain control over their missing limb, and that it also alleviated phantom limb pain to some extent. Other teams are investigating the use of virtual reality mirror boxes for treating phantom limb pain.

In this film clip, Ramachandran explains his theory that the method works because visual feedback from the reflection tricks the brain into thinking that the missing limb is present; an amputee then demonstrates the use of the mirror box, and describes its usefulness:

Others have explained the mirror box phenomenon in terms of an internal forward model, whereby the brain predicts the sensory inputs which will occur as a result of bodily movements. Thus, the predicted movement leads to the sensation that the phantom limb is actually moving.