A characteristic pathology of most neurodegenerative diseases is the accumulation of abnormally folded proteins within or around nerve cells. These protein aggregates are insoluble and toxic, but it is still not known whether they cause, or are caused by, pathogenesis of the conditions.

Alzheimer’s Disease, which the most common form of dementia and the most widely researched of all the neurodegenerative diseases, is characterized by the presence of tau protein aggregates within neurons, as well as aggregates of beta-amyloid (Aβ) protein, which forms amyloid plaques in the spaces between neurons.

Aβ is a peptide of between 39-42 amino acid residues, encoded by the APP (amyloid precursor protein) gene. The molecular genetics of APP, and its cellular processing, are very complex. The gene undergoes alternative splicing to produce various peptides which perform different, and as yet unknown, cellular functions. Aβ is generated by the sequential cleavage of the full-length APP gene product by the enzymes β- and γ-secretase, and is insoluble and amyloidogenic (prone to aggregation). Up to 10% of cases of Alzheimer’s Disease are associated with mutations in the APP gene which alter the actions of enzymes on APP, such that Aβ is synthesized in greater amounts.

The transmissible spongiform encephalopathies (TSEs) are a group of related neurodegenerative diseases with which the accumulation of abnormally-folded proteins is associated. In the case of the TSEs, which include bovine spongiform encephalopathy (BSE, or ‘Mad Cow Disease’), scrapie in sheep and Creutzfeldt-Jakob Disease (CJD) in humans, the protein which accumulates within cells is the prion protein (pronounced pree-on). The prion protein is found in all cells but its function is unkown. In the TSEs, it adopts an abnormal three-dimensional conformation, which makes it insoluble and prone to aggregation. This abnormal prion underlies TSE pathogenesis.

According to the prion hypothesis, the prion protein is the infectious agent which transmits the TSEs between organisms. (Prion is an abbreviation for proteinaceous infectious particle.) Abnormally folded prions are believed to initiate a nucleation-polymerization reaction upon infection; that is, the abnormal prion proteins act as a “seed”, causing the normal cellular prion proteins to adopt the abnormal configuration, which makes the molecules prone to self-polymerization and aggregation. Some of these aggregates are then disassembled, and the fragments dispersed to seed the formation of more aggregates. It is thought that TSEs are transmitted by the consumption of infected meat; one form of human prion disease, kuru, is believed to be transmitted during the ritual of mortuary cannibalism practised by the South Fore peoples of Papua New Guinea. 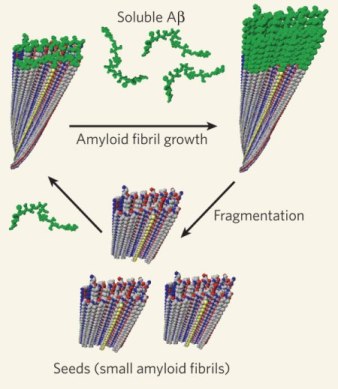 A recent paper in the journal Science provides some evidence that Aβ can, like the prion protein, initiate the nucleation-polymerization in cells into which it is introduced.

Meyer-Luehmann, et al used two strains of transgenic mice in their experiments. Mice of one strain (APP23) over-produce the 40-amino-acid Aβ peptide, while mice of the other strain (APPPS1) over-produce the 42-amino acid peptide. In both strains, Aβ plaques are deposited in the brain as the animals age, but the strains differ in the distribution and appearance of the plaques.

The experiments involved taking brain extracts from deceased Alzheimer’s patients or from aged mice of both strains, and injected them into the brains of young mice of both strains, before they had developed the symptoms of the disease. It was observed that all extracts had a seeding activity in both strains of mice – they induced the deposition of the Aβ peptide, which aggregated to form plaques in the brains of the mice into which they had been injected. The seeding activity was both time- and concentration-dependent (i.e. seeding increased with time, and with greater concentrations of Aβ in the extracts), but differed depending on the strain of mouse the extract was taken from, and the strain it was injected into.

However, if the extracts were treated with anti-Aβ antibodies, or heated so that the structure of the Aβ molecules was destroyed, the seeding activity was abolished. Similarly, if the host mice were immunized against Aβ before they were injected with the extracts, seeding did not occur. Finally, no seeding activity was observed when any brain extract was injected into the brain of normal mice, suggesting that, if Alzheimer’s was indeed found to be infectious, an infected individual would have to be genetically predisposed to the condition in order for it to develop.

One could predict that the accumulation of abnormal proteins in other neurodegenerative diseases – e.g. alpha-synuclein in Parkinson’s Disease and huntingtin in Huntington’s Disease, may also occur as a result of a prion-like seeding process. But for me, the most puzzling question of all is this: how would an Alzheimer’s infection be transmitted?

5 thoughts on “Could Alzheimer’s be infectious?”