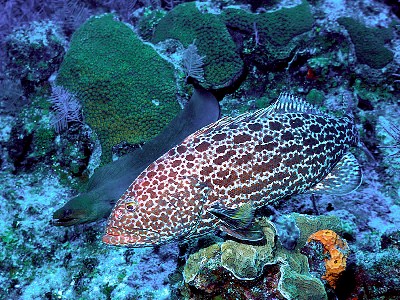 Cooperation during hunting has been demonstrated in a wide variety of species, including lions, chimpanzees and bottlenose dolphins. However, cooperative hunting between animals of different species is extremely rare, and the initiation of a hunt by some mode of communication between members of a group even more so.

In PLoS Biology, Bshary et al report on cooperative hunting between the grouper fish, Plectropomus pessuliferus, and the giant moray eel, Gymnothorax javanicus, which they examined during field observations in the coral reefs of the Red Sea. They also show that this behaviour is initiated by a visual signal produced by the grouper. This is, therefore, the first known example of communicative, cooperative hunting between two different species.

The grouper and the moray eel have complementary hunting strategies – the grouper hunts in open waters, while the moray eel seeks its prey in crevices between rocks. In hunting cooperatively, the two strategies become highly coordinated, with each species playing a different role in the hunt. This makes cooperation mutually beneficial, as it increases the successful capture of prey by both species. The high level of coordination between the two species also makes this example of cooperative hunting different from that of groups of animals of the same species, which can usually be regarded the simultaneous execution of hunts by two or more individuals in the group.

Bshary and his colleagues show that this cooperative hunting is initiated by a visual signal produced by the grouper. The signal consists of a horizontal shaking of the head, at a frequency of 3-6 times per second. The grouper’s dorsal fin and body posture are apparently also involved in signalling: during the head-shaking, the bony part of the dorsal fin remains flat, while the soft part stands erect. Groupers were also observed to remain directly above the hiding place of prey, and to shake their heads while performing a headstand. This signal always resulted in the inspection of the hiding places by other predators, such as (the Napoleon wrasse, Cheilinus undulatus, and the yellowlip emperor, Lethrinus xanthochilus. But on no occasion were morays seen signalling to groupers.

It may not look very significant, but this signalling is intentional. A shake of the head recruits a moray eel to follow prey into crevices that are inaccessible to the grouper. In the event of an unsuccessful hunt, groupers remain near the crevice into which prey have escaped. While remaining out of sight, the groupers again signal a nearby moray, guiding it to the hiding place of the potenital prey.

It is not yet understood exactly what information is conveyed in this signal, but the researchers speculate that the signals indicate the groupers’ motivations to engage in joint hunting, and that, for the morays, the visual cues represent a conditioned stimulus. The study also shows that the initiation of cooperative hunts are determined by the satiety levels of the grouper. The groupers observed in the study did not produce any signals for up to 2 hours after being fed by the experimenters.

Normally, prey captured by co-operative hunting is shared amongst those involved in capturing it; heirarchical structure of the group, with dominant members feeding off the carcass first. In contrast, prey caught by cooperation between groupers and moray eels (usually small reef fish) are swallowed whole by the animal which catches them, thus minimizing any aggressive competition over the carcass. The authors suggest that monopolization of prey carcasses is an important reason that such co-operative hunting between species is not more widespread.

The grouper-moray interaction described in the study is not an example of altruistic behaviour, as neither species acts any differently than it would if hunting alone, nor sacrifices anything for the other. However, the grouper is inducing a change in the behaviour pattern of its hunting partner, which is otherwise a nocturnal hunter. Both species are presumed to have adopted cooperative hunting as a result of associative learning – from experience, each knows that hunting in the vicinty of the other increases its success rate.

Communicative, coordinated hunting has only ever been obsereved in a single troup of monkeys in Ghana’s Taï National Park; other monkey troups engage in opportunistic cooperative hunting. Cooperation and other complex social behaviours require a high level of cognition, and organisms are usually placed in a heirarchy according to the cognitive abilities they are believed to have. But clearly, it is very difficult to determine the cognitive abilities of animals. This, and a number of other recent studies, such as one demonstrating self-awareness in elephants, turns the idea of a “ladder” based on intelligence on its head.