At the University of Missouri-Columbia’s Mason Eye Institute, Kristina Narfström, a professor of veterinary ophthalmology has been implanting microchips into the eyes of blind cats in the hope of restoring their vision.

Narfström has been experimenting on Abyssinian and Persian cats with feline rod cone retinal degeneration, a hereditary disease in which the light-sensitive photoreceptor cells in the retina – the rods and cones – fail to develop. The disease, which results in blindness within weeks of birth, is the feline equivalent of retinitis pigmentosa, which affects approximately 1.5 million people.

The microchip used by Narfström is wireless and inert. It is just 2 millimeters in diameter and 23 micrometers thick, and consists of an array of about 5,000 microphotodiodes. Because each of these microscopic cells is powered by the energy contained in the incident light which lands upon it, the implant does not require batteries.

The microphotodiode array constitutes an artificial retina – it is designed to perform the function that would normally be carried out by the photoreceptor cells. Each one is sensitive to light, and has an electrode attached to it, so that, when struck by light, it generates an electrical impulse which is transmitted to the retina.

The microchip is implanted into the eye by a microsurgical procedure that lasts about 2 hours. Firstly, three tiny incisions are made in the white of the eye, and the vitreous humor is replaced with a saline (salt water) solution. A small opening is then made in the retina. Fluid injected through the opening lifts part of the retina away from the back of the eye, enabling the device to be placed into the subretinal space. Air is then introduced into the middle of the eye, pushing the retina down over the implant. In the days following the procedure, the air bubble and the saline solution are replaced by the fluids produced by the eye. 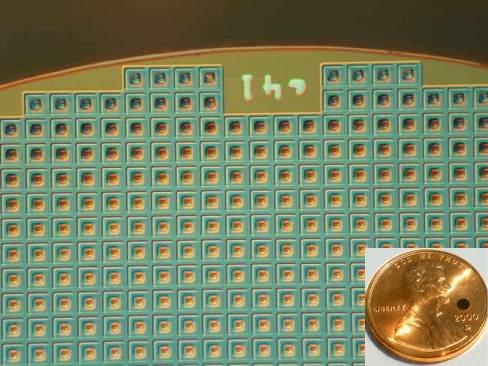 A close-up of the microchip showing the microphotodiode array, and the Artificial Silicon Retina device lying on a penny (inset).

“This technology can benefit both animals and humans,” says Narfström. “[It has] the potential to create improved vision in some of the millions of people affected worldwide with retinal blindness.” By making advances in the surgical technique with which the device is implanted, Narfström is contributing to the development of possible treatments for human eye diseases.

Researchers at Optobionics Corp., the Naperville, Illinois-based company which developed the microchip used by Narfström, have patented the device, which they call the Artificial Silicon Retina (ASR). The ASR is still in the experimental stages, but has been implanted into about 30 people. In January 2000, the U. S. Food and Drug Administration (FDA) authorised the use of the ASR chip in clinical trials involving up to 10 patients with retinitis pigmentosa.

The cat’s eye is very similar to that of humans, and, in the trials, the ASR was implanted eye using exactly the same surgical procedure used by Narfström to implant the chip into cats’ eyes. None of the 10 patients who participated in the trials showed any signs of inflammation or rejection of the implant by the immune system. The ASR device therefore seems to be safe, and can feasibly be used to develop treatments for various ocular diseases in which photoreceptor degeneration occurs. By electrically stimulating slightly damaged photoreceptors, the ASR may also prove to be effective in slowing the progression of degenerative eye diseases.

One thought on “An artificial retina for cats and humans”