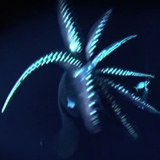 In 2005, Japanese researchers obtained, for the first time, footage of a giant squid in the wild. Now, they have used a newly- developed underwater high-definition video camera system to record the hunting behaviour of another species of giant squid, Taningia danae.

The footage below was obtained between 240-940 metres deep, near Ogasawara Islands in the North Pacific, and shows the squid producing bioluminescent displays as it circles torch lights attached to a bait rig. As the squid approaches the bait, it spreads its arms widely and emits short bright flashes of bioluminescence, lasting about 1 second. As well as dazzling and disorienting prey, these displays may also serve to illuminate the squid’s deep sea environment, thus enabling it to measure the distance between itself and its prey. When the lights from the bait rig were switched on, the squid produced longer bioluminescent flashes, lasting about 5 seconds. The researchers believe that these may be courtship displays.

T. danae can reach more than 2 metres in length and is thought to be one of the largest mesopelagic (or mid-depth) cephalopods found in tropical and sub-tropical oceans. This is the first time that a giant squid has been observed using bioluminescence when hunting. Although large, the giant squid is an active predator that is far from sluggish in its movements – it can reach speeds of up to 2.5 metres per second, swims both forwards and backwards, and can use its large triangular fins to change direction quickly.

A subtler, but perhaps more dazzling bioluminescent display is that of the vampire squid Vampyroteuthis infernalis:

There are 100 known genera of squid and cuttlefish, 63 of which produce bioluminescence. Cephalopods possess light-producing organs called photophores, which can be arranged in simple clusters or in complex organs containing lenses, reflectors and light filters. In some cephalopods, light is produced by symbiotic bacteria which are housed and cultured within pockets in the skin; other species produce the light themselves.

Squid also use bioluminescence to avoid being detected by predators. In a process called countershading, they turn on downward- facing photophores when illuminated from above; when the intensity of the bioluminescence matches that of the overhead illumination, the squid becomes invisible.

Bioluminescence is produced when pigment molecules called luciferins are oxidized (i.e. have electrons removed from them). This reaction is carried out by enzymes called luciferases, which are believed to have evolved from oxygenases. The function of luciferases and oxygenases is to transfer electrons from one molecule to another, and they are therefore involved in neutralizing free radicals (compounds which contain unpaired electrons, and which are damaging to tissues). In the deep sea environment there is little light, and organisms are therefore not exposed to free radicals produced by direct sunlight as are organisms which live nearer the surface. Neutralization of free radicals is therefore not crucial in deep waters, and this is where luciferases evolved their light-producing functions.

The photophores found in T. danae measure up to 5 cm in diameter and are the largest found in the animal kingdom. They are equipped with black “eyelids” which can open and shut rapidly, so that the emitted light appears to flash on and off.

WELLINGTON, New Zealand – A fishing crew has caught a colossal squid that could weigh a half-ton and prove to be the biggest specimen ever landed, a fisheries official said Thursday. The squid, weighing an estimated 990 pounds and about 39 feet long, took two hours to land in Antarctic waters, New Zealand Fisheries Minister Jim Anderton said. [snip] “I can assure you that this is going to draw phenomenal interest. It is truly amazing,” said Steve O’Shea, a squid expert at the Auckland University of Technology. If calamari rings were made from the squid they would be the size of tractor tires, he added.