Sea sponges are sedentary organisms that attach themselves to the sea bed and filter nutrients from the water that they force through their porous bodies with flagella. They are the most primitive of all multicellular animals, with just four different types of cells making up partially differentiated tissues in a simply organized body.

Because of the lifestyle they lead, sea sponges do not need, and therefore lack, nerve cells, muscle cells and internal organs of any kind. However, researchers from the University of California at Santa Barbara now find that one species of sea sponge, called Amphimedon queenslandica, synthesizes many of the proteins that are essential for the cell-to-cell communication that takes place within nervous systems. These surprising findings, which are published in the open access journal PLoS One, therefore provide clues about how the first neurons may have evolved in the most ancient of animals.

Neurons are specialized to communicate with one another. The signalling between one nerve cell and another takes place at a structure called the synapse, a miniscule gap of about 40 nanometres found at the junction between adjacent cells. The gap itself is no more than a space across which chemical signals (the neurotransmitters) diffuse. The active elements of the synapse are the two apposed cell membranes – the pre-synaptic membrane, from which the chemical signals are released, and the post-synaptic membrane, which detects the signals and responds to them in the appropriate way by communicating to the interior of the cell.

Each neuron has regions of its cell membrane specialized for sending the chemical signals, and others specialized for receiving them. The signalling process is known to involve many dozens of proteins that are either embedded within, or located just inside, the membrane<. Each type of protein has a specific role in the signalling process. At the pre-synaptic membrane, for example, neurotransmitter molecules are packaged in synaptic vesicles, which remain "docked" at release sites along the inside of the membrane until needed. When a nervous impulse reaches the nerve terminal, it causes the vesicles to fuse with the membrane and to release their contents into the synapse. Once a vesicle is emptied of its cargo, it goes through an elaborate process of recycling. 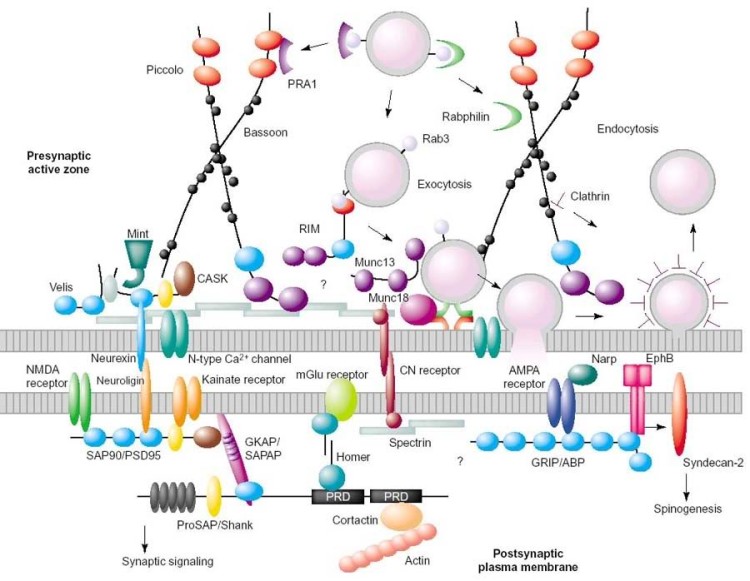 As the neurotransmitters diffuse across the synapse, they bind to receptors, Some receptors are voltage-gated ion channels; these are barrel-shaped proteins with a central pore that spans the membrane and opens in response to binding of a transmitter molecule. When the channel opens, it allows the passage of a specific type of ion (sodium, say, or potassium) into or out of the cell. This is a typical response of a neuron – the ion movements change the voltage across the membrane, altering the pattern of signals generated by that cell. Other receptors do not contain pores but instead are specialized to interact with various other proteins inside the cell, in response to a signal. These interactions initiate biochemical reactions within the cell, or communicate the signal to the cell membrane so that the activity of a specific gene or set of genes is altered.

The density also regulates the movements of the machinery within the membrane and the area immediately inside it, and, so, is a highly dynamic structure. The dynamic nature of the density is believed to be crucial the strengthening of synapses that occurs during memory formation. Shuffling of proteins within the post-synaptic density after an initial stimulus may, for example, lead to an increase in the number of receptors at a certain region of the membrane, such that the subsequent response to the same stimulus becomes more efficient. Thus the density is essential in maintaining the integrity of the synapse, and is a major player in the neuronal plasticity that underlies learning and memory.

In the new study, Kenneth Kosic and his colleagues analyzed the Amphimedon genome, and found that it contains 36 families of genes known to encode proteins of the post-synaptic density. So, even though it has no neurons, this sea sponge synthesizes an almost complete set of post-synaptic density proteins. A comparison of the DNA sequences from the 36 sea sponge genes with the homologous sequences from humans, Drosophila melanogaster (fruit flies) and Nematostella vectensis (a cnidarian with a simple nervous system, consisting of a loose network of nerves) revealed striking similarities between the genes in all four species. One gene, called dlg, encodes a crucial component of the post-synaptic density scaffold. The protein product of that gene contains a number of regions that form the protein-protein bonds that hold the scaffold together. The segment of the dlg gene encoding these binding regions was found to be highly conserved – the DNA sequences in the sea sponge gene were identical to the human sequences. This suggests that in the sea sponge these proteins interact in exactly the same way as they do in the human post-synaptic density.

Amphimedon has nearly all the components required to make a post-synaptic density; only a few of the human postsynaptic density genes are missing from the sea sponge’s genome – those encoding ion channel receptors for the neurotransmitter glutamate. (These genes are, however, present in the cnidarian, which expresses them in its simple nervous system.) In sponges, the genes are expressed predominantly in the flask cells of the free-swimming larvae, where they may be involved in sensing chemical cues found in the organism’s environment. Flask cells with post-synaptic densities may predate the first neurons. If so, the first synapses may have evolved from post-synatic densities in a process called exaptation, whereby a pre-existing structure is modified slightly to perform a new function. It is, however, also possible that flask cells evolved from simple neurons that lost some of their synaptic components.