Penis envy. Repression. Libido. Ego. Few have left a legacy as enduring and pervasive as Sigmund Freud. Despite being dismissed long ago as pseudoscientific, Freudian concepts such as these not only permeate many aspects of popular culture, but also had an overarching influence on, and played an important role in the development of, modern psychology, leading Time magazine to name him as one of the most important thinkers of the 20th century.

Before his rise to fame as the founding father of psychoanalysis, however, Freud trained and worked as a neurologist. He carried out pioneering neurobiological research, which was cited by Santiago Ramón y Cajal, the father of modern neuroscience, and helped to establish neuroscience as a discipline.

The eldest of eight children, Freud was born on 6 May, 1856, in the Moravian town of Příbor, in what is now the Czech Republic. Four years later, Freud’s father Jakob, a wool merchant, moved the family to Austria in search of new business opportunities. Freud subsequently entered the university there, aged just 17, to study medicine and, in the second year of his degree, became preoccupied with scientific research. His early work was a harbinger of things to come – it focused on the sexual organs of the eel. The work was, by all accounts, satisfactory, but Freud was disappointed with his results and, perhaps dismayed by the prospect of dissecting more eels, moved to Ernst Brücke’s laboratory in 1877. There, he switched to studying the biology of nervous tissue, an endeavour that would last for 10 years.

Brücke was a pioneering physiologist interested, among other things, in the effects of electricity on the nerves and muscles. Together with contemporaries such as Hermann von Helmholtz and Emil du-Bois Reymond, he played a key role in overturning vitalism, the notion that living things differ from inanimate objects because they possess some kind of non-physical entity, often called a “vital spark,” or merely “energy,” that was likened by some to the soul. (Brücke was also of the opinion that all living things are dynamic and subject to the laws of chemistry and physics, an idea later misappropriated by Freud in his psychodynamic theory.)

Freud spent six years in Brücke’s lab, during which time he was tasked with comparing the brains of humans and other vertebrates with those of invertebrates, to determine whether there were any essential differences between them. This involved examining the brains of frogs, crayfish and lampreys under the microscope, and led to a number of important discoveries.

He demonstrated, for example, that nerve fibres emerge from grey matter within a web-like substance, and that the lamprey spinal cord contains undifferentiated cells that later become the origin of the sensory nerve roots – a discovery that helped establish the evolutionary continuity between all organisms. He was also the first to describe the structure and function of a part of the brainstem called the medulla oblongata, and the white matter tracts connecting the spinal cord and cerebellum. 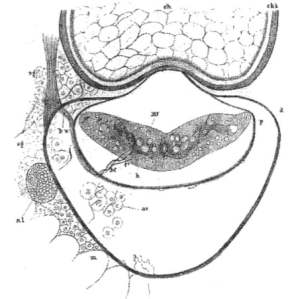 At the time, the structure of the nervous system was the subject of an on-going debate. In the 1830s, Theodor Schwann and Matthias Schleiden had proposed, on the basis of what they had seen under the microscope, that all living things consisted of fundamental units called cells. But the microscopes available at the time were not powerful enough to resolve synapses, the miniscule gaps between nerve cells, and histologists were divided into two camps – the neuronists, who argued that the nervous system must consist of cells like all other living things, and the reticularists, who believed that it was composed instead of a continuous network of tissue.

Freud made a significant contribution to this long-lasting debate. In the late 1870s and early 1880s, he observed the relationship between the grey matter and the nerve fibres that emerge from it, and described it accurately and consistently. The diagram above, from a paper that he published in 1877, shows the spinal cord of the lamprey, and includes what appear to be nerve cell bodies within the grey matter.

Freud also developed a new method for staining nervous tissue. “In the course of my studies of the structure and development of the medulla oblongate,” he wrote in an 1884 paper entitled ‘A new histological method for the study of nerve-tracts in the brain and spinal chord,’ published in the prestigious journal Brain, “I succeeded in working out the following method… Pieces of the organ are hardened in bichromate of potash, or in Erlicki’s fluid (2 1/2 parts of bichromate of potash and 1/2 of sulphate of copper to 100 parts of water) and the process of hardening is finished by placing the specimen in alcohol; thin sections are cut by means of a microtome and washed in distilled water. The washed sections are brought into an aqueous solution of chloride of gold (1 to 100) to which is added half or an equal volume of strong alcohol.”

Freud described his observations in a lecture in 1884: “If we assume that the fibrils of the nerve fibre have the significance of isolated paths of conduction, then we would have to say that the pathways in which the nerve fibres are separate are confluent in the nerve cell: then the nerve cell becomes the ‘beginning’ of all those nerve fibres anatomically connected with it… I do not know if the existing material suffices to decide this important problem. If this assumption could be established it would take us a good step further in the physiology of the nerve elements: we could imagine that a stimulus of a certain strength might break down the isolated fibres, so that the nerve as a unit conducts the excitation, and so on.”

Thus, Freud very nearly discovered the neuron, but the way in which he presented his findings was somewhat reserved and vague. The Neuron Doctrine – which states that nerve cells are the fundamental structural and functional element of the nervous system – finally gained wide acceptance in the early 1890s, a full seven years after Freud’s lecture. This was, in large part, because of Cajal, who used staining methods similar to that developed by Freud to visualise and compare nervous tissue from various animals.

Today, the Neuron doctrine is the cornerstone of modern neuroscience. But although Freud’s early observations were cited in Cajal’s magnum opus,Histology of the Nervous System of Man and Vertebrates, as evidence for the existence of neurons, his contribution to the development of this crucial idea are all but forgotten, and were eventually overshadowed by his work in psychoanalysis.

Costandi, M. (2006). The discovery of the neuron. Neurophilosophy blog.