It is well documented that the lepidopterans (moths and butterflies) can produce acoustic signals. Moths and butterflies have tympanic ears which they use primarily to detect the ultrasonic emissions of echolocating bats; they also produce sounds to startle and confuse bats as they hunt for prey.

It has been known for over 100 years that caterpillars also produce acoustic signals. Several examples of this have been investigated. For example, larvae of the Australian common Imperial blue butterfly produce vibrational signals to communicate with ant symbionts, and some species of leaf miner and owlet moths can detect the sounds and vibrations made by predators and parasites, but, in general, the significance of acoustics in caterpillars remains unknown.

Now, a study led by Jayne Yack, a neuroethologist at Carlton University in Ottowa, shows that the silkmoth caterpillar (Antheraea polyfemus) produces clicking noises to deter predators. This clicking precedes the regurgitation of a repellent dark brown liquid, and acts to warn a predator of the imminent deployment of the caterpillar’s chemical defences. Of twelve other moth species examined, two more – the tobacco hornworm and luna moth larvae – were also found to do the same. The findings are reported in the current issue of the Journal of Experimental Biology.

Yack and her colleagues simulated predatory attacks on the caterpillars by pinching their head capsules with forceps, and filmed the defensive behaviours of the larvae. It was found that the larvae produced the clicking noises when their heads were pinched, and also when the researchers blew on them or rattled the enclosures in which they were kept. It was also found that the likelihood of the caterpillars producing the clicking sounds and regurgitating the repellent fluid was directly related to the severity of the attack.

The caterpillars produced trains of clicks lasting over 60 seconds. These are audible to humans; each click lasts approximately 25 milliseconds, and the entire train consists of 50-55 clicks. The clicks constitute a broadband signal which can be perceived by a diverse range of the caterpilllar’s natural predators, whose hearing ranges differ widely. Earlier studies suggested that caterpillars produce such sounds by opening and closing their mandibles. Using electron microscopy, Yack’s team confirmed this. They found that each of the silkmoth caterpillar’s mandibles has several tooth-like ridges; these serrated edges produce the clicking sound when thy come into contact with each other.

The regurgitated liquid was found to be repellent to both invertebrates (ants) and vertebrates (mice), but its composition is as yet unknown. Energy-wise, the fluid is costly to produce; the caterpillar recycles it sucking up any fluid that remains near its mouth after an attack. And, although the clicks are relatively loud (60-80 dB), they can only be heard in the caterpillar’s immediate vicinity. Thus, the caterpillar’s first line of defence is camouflage – it remains inconspicuous because of its cryptic colouration. But, if discovered by a predator, it clicks and regurgitates the liquid as a last resort. Yack would like to find out whether or not the clicks alone are sufficient to deter a predator, and to determine the composition of the regurgitant.

This film clip show a silkmoth larva emitting a train of clicks during a vicious attack from a chicken; a trail of regurgitant can be seen on the surface on which the encounter was staged: 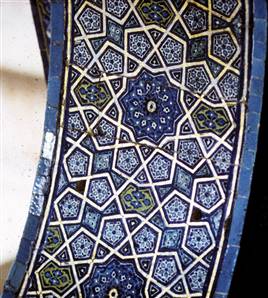 There’s no connection between these two new papers, apart from my finding them both interesting. I’ll be writing more on both subjects soon, but meanwhile here are the abstracts and a few thoughts.

In the first paper, from today’s issue of Science, physicists Lu and Steinhardt, of Harvard and Princeton, respectively, describe geometric patterns from 15th Century mosques in Afghanistan, Iran and India, and say that the tiling patterns weren’t “discovered by the West” until about 500 years later:

The conventional view holds that girih (geometric star-and-polygon, or strapwork) patterns in medieval Islamic architecture were conceived by their designers as a network of zigzagging lines, where the lines were drafted directly with a straight edge and a compass. We show that by 1200 C.E. a conceptual breakthrough occurred in which girih patterns were reconceived as tessellations of a special set of equilateral polygons (girih tiles) decorated with lines. These tiles enabled the creation of increasingly complex periodic girih patterns, and by the 15th century, the tessellation approach was combined with self-similar transformations to construct nearly perfect quasi-crystalline Penrose patterns, five centuries before their discovery in the West.

As this paper shows, the contributions of the Arabs to the physical sciences, and the influence of the Arabs over pre-Renaissance Western thought, cannot be underestimated. By 1,200, when they made their “conceptual breakthrough, the Arabs had also made advances in biology that would not be paralleled in the West for centuries.

The Bush administration’s foreign policy is based on the idea of a “clash of civilizations”; that Islamic civilization was once great – during the ‘golden age’ of Islam, when Arab science and philosophy blossomed, Europe was still largely in the dark ages; that it eventually fell into decline, then got taken over and left behind by “the West”; and that “they” (Arabs/ Muslims) hate “the west” because of the humiliation and anger this caused. The matter is, of course, far more complex than that; I’m going to focus on Arabic science, but a little politics may creep in.

The second paper, about chimps manufacturing and using tools, was published online yesterday in Current Biology, and has received a lot of attention from the media.

Although tool use is known to occur in species ranging from naked mole rats to owls, chimpanzees are the most accomplished tool users. The modification and use of tools during hunting, however, is still considered to be a uniquely human trait among primates. Here, we report the first account of habitual tool use during vertebrate hunting by nonhumans. At the Fongoli site in Senegal, we observed ten different chimpanzees use tools to hunt prosimian prey in 22 bouts. This includes immature chimpanzees and females, members of age-sex classes not normally characterized by extensive hunting behavior. Chimpanzees made 26 different tools, and we were able to recover and analyze 12 of these. Tool construction entailed up to five steps, including trimming the tool tip to a point. Tools were used in the manner of a spear, rather than a probe or rousing tool. This new information on chimpanzee tool use has important implications for the evolution of tool use and construction for hunting in the earliest hominids, especially given our observations that females and immature chimpanzees exhibited this behavior more frequently than adult males.

The chimps were observed and filmed making and using the spears. (I’ve uploaded two of the film clips from the supplementary data onto YouTube.) In the first step of this process, they locate a potential nest cavity then select a branch of an appropriate size. The branch is then broken off, and trimmed off its leaves and side branches. In a quarter of cases, the spear was then used. On other occasions, the monkeys continued to trim one or both ends of the branch, and then the tip, before enlarging the nest cavity and using the spear to retreive the bushbaby.

This would appear to be the first observation of a non-human using a weapon to kill prey – the chimps used their spears to stab bushbabies hiding in trees cavities. However, crows, rooks, and jays have equally, if not more, sophisticated tool-using capabilities. The method of fashioning tools described here is very similar to the tool-making techniques of Caledonian crows; the similarity between the two is actually quite remarkable – the crows break branches to make hook-shaped tools, sculpt the hook very finely with the tips of the beak, then use the tools to retrieve food from cavities in trees, or from the soil. But although the authors mention owls in the abstract, there’s no discussion about tool-manufacture/use in birds elsewhere in the paper. There’s no mention of birds at Mixing Memory or Tetrapod Zoology either.