In a paper published in the British Ecological Society‘s Journal of Animal Ecology, researchers from the Woods Hole Oceanographic Institution and the University of St Andrews report details of how sperm whales use echolocation to forage for food.

Stephanie Watwood and her colleagues attached digital tags to 37 individual whales so that they could be traced acoustically and their diving behaviour and vocalizations investigated. The newly developed tags enabled Watwood’s team to gather a wealth of information about the foraging dives of the whales, which, until now, biologists knew very little about.

During the study, which was carried out in the Atlantic Ocean, the Gulf of Mexico and the Ligurian Sea, a total of 198 individual foraging dives were observed. It was found that the whales spent about three-quarters of their time on foraging cycles, each lasting an average of 45 minutes. The whales re-surfaced for around 9 minutes between dives, and, in the Atlantic, could dive to depths of nearly 1,000 metres.

It was also found that the sperm whales emitted a series of clicks during their dives. These clicks enable the whales to find prey (mainly squid) by echolocation. As the whales descend into the depths, the frequency of clicks increases, enabling the whales to obtain detailed information regarding the position and movements of prey. Regular clicks function as a long-range biological sonar; clicking frequency continues to increase as the whales approach their prey, until the clicks are so close together that they sound like a continuous buzz. Whales descended an average of 392 metres between the start of regular clicking and the first buzz, which corresponds to the point at which they are about to catch a squid.

Echolocation – or biosonar – can be thought of as an auditory imaging system used by various species for navigation and to perceive the location of prey in environments where vision is ineffective. This involves the emission of vocalizations by the echolocating animal, which then detects the echoes of those sounds and uses them to produce three-dimensional information about the environment.

Organisms that use echolocation – toothed whales, small mammals such as rats and shrews, and two groups of birds – understand the world largely via the interpretation of acoustic reflections. In other words, echolocation is a type of auditory scene analysis which requires specialized neural mechanisms and complex computations. The neural circuitry underlying echolocation allows for the perceptual organization of auditory information, which guides complex spatially-guided behaviours.

Most of the research into echolocation has been carried out in bats, in which it has evolved to the most sophisticated level. From the fossil record it appears that bats have been echolocating for over 50 million years. Bat species which use echolocation are of the suborder Microchiroptera, within the mammalian order Chiroptera. Within the Microchiroptera suborder are about 800 bat species, most of which are insectivorous and use echolocation to catch food. 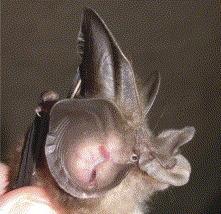 Echolocating bats have enlarged ears so that they can detect faint echoes. Some, like the Chinese species Rhinolophus paradoxolophus (left), can also send soundwaves through their nostrils, and have evolved large nose leaves to focus the sound waves.

Many dolphin species produce ultrasonic echolocation signals but some toothed whales, such as the sperm whale and the dolphin, produce signals that are audible to humans. Because sound travels faster in water than it does in air, the signals produced by toothed whales are of a much shorter duration than those produced by bats.

Dolphins produce two main types of echolocation signals – short duration broadband signals or narrowband signals of longer duration. Dolphins produce their echolocation signals in organs called nasal sacs, which are located on top of the brain. A structure called the melon acts as a lens, focusing the sound waves into a narrow beam which is projected forward. Echoes are believed to be received by the panbone in the dolphin’s lower jaw; fatty tissue behind the panbone transmits the sound waves to the middle ear and then to the brain. Some researchers believe that the teeth are also involved in transmitting echoed sounds to the dolphin’s brain.

A few bat species have the remarkable ability to compensate for the changes in frequency of sound waves produced by their own movement and that of prey. The frequency of vocalization echoes that occurs while a bat is accelerating towards a target is higher than the frequency of the emitted sounds, becuase the acceleration ‘squeezes’ the peaks of the sound waves closer together (in the same way that the pitch of a siren increases as a police car moves towards you, then decreases as it moves away). The so-called Doppler shift compensation involves an adjustment by the bat of the frequency of its emitted vocalizations, so that the frequency of the echoes falls within the range that can be perceived by its auditory system.

Echolocation can provide highly detailed information about a target. It enables bats to discriminate the acoustic image of small flying insects in environments containing dense vegetation with thousands of surfaces which themselves reflect sound waves. The shape of a target can be perceived by the spectrum of echoes from different parts of the target. Other data obtained from the echo spectrum include the relative velocity of a target, the flutter of the target, and the target’s size and elevation.

The time delay between production of the click and reception of the echo provides information about the distance of objects. In air, sound travels at 340 metres per second, so a delay of 2 milliseconds between production and reception corresponds to a target that is 34 centimetres away. Just as the vocalizations of sperm whales were seen to increase in frequency as they approached their prey, so do bats produce ‘feeding buzzes’ as they home in on insects.

In bats, the auditory cortex carries out the computations which transform the echo spectrum into estimates of distance. The auditory system of bats is similar to that of other mammals. In bats, however, audition is the primary sensory modality. Sound waves are directed by the ears, and sometimes the nose, to the inner ear, where they fall on the basilar membrane of the cochlea. The basilar membrane vibrates in response to the sound waves, which stimulates hair cells to produce nervous impulses which are sent to the auditory cortex via the brainstem. Like the cochlea of other mammals, that of the bat contains hair cells, each of which is adapted to respond to sound waves of a specific frequency. The frequencies of sound waves produced and perceived by bats (14-100 KHz) are well outside the hearing range of humans; in the auditory cortex, neurons in specialized ganglia are also adapted to respond to sounds of specific frequencies.

Bats have evolved several specialized neuroanatomical structures enabling them to echolocate, and individual species have their own unique specializations. In all echolocating species, brainstem nuclei of the ascending auditory pathway are enlarged. Neurons in some nuclei of the lateral lemniscus are arranged in columns which receive tonotopically arranged inputs (ie. the inputs are arranged according to sound frequency). These inputs are received via conspicuously large calyx synapses, which are also found in dolphins. Neurotransmission across these synapses occurs particularly quickly, and the neurons in these nuclei function as time markers. These cells process frequency-modulated components of echolocating signals, and are specialized for detecting interaural time differences (the difference in time between the arrival of a sound at one ear and the other).

In the different groups of animals which use it, echolocation evolved seperately as an adaptation to a particular environment, and is essential to the survival of those species. In humans, echolocation is not so important. Echolocation research does, however, have implications and possible applications for humans.

For example, both sonar and ultrasound are based on the detection of echoed sound waves, and knowledge of the Doppler shift has been put to use in the development of, among other things, speed cameras. The same mechanisms underlying particular aspects of echolocation – particularly the detection of interaural time differences – are probably also involved in the cocktail party effect, whereby people dscriminate a specific sound within a noisy environment. Some research groups are also training blind people to use echolocation to navigate their environments, and are trying to develop devices which can help them to do this.

4 thoughts on “How sperm whales use echolocation to catch prey”