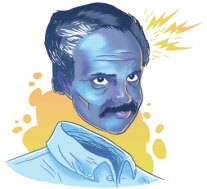 Seed has a short article by V.S. Ramachandran on the evolution of consciousness:

I suggest that a new set of brain structures evolved during hominid evolution, turning the output from more primitive sensory areas of the brain into what I call a “meta- representation.” I think they edited, enhanced and packaged sensory information into more manageable chunks, used for juggling symbols and language.

Ramachandran is director of the Center for Brain and Cognition at the University of California, San Diego.

In the film below, Ramachandran discusses phantom limb sydrome, synaesthesia and mirror neurons. The lecture he gives in the film is one of 12 given at IBM’s Almaden Institute Conference on Cognitive Computing.  (‘Rama’ starts his talk about four-and-a-half minutes into the film.)