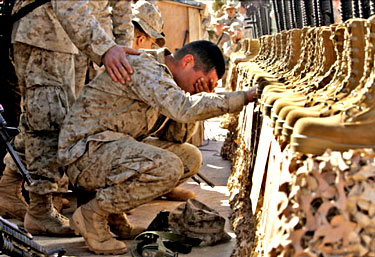 The U. S. Department of Defense is failing to provide adequate psychological support for troops serving in and returning from Iraq, according to a report by the American Psychological Association (APA). The 67-page report, which is authored by a task force of 8 psychologists, was released yesterday.

Here are the main findings:

The inadequacies in mental health services for military personnel also have consequences for the troops’ families. (There are approximately 700,000 children in the U. S. with at least one parent deployed on military service.)

The report also provides a number of recommendations:

Update (27th February, 2007): Discover magazine has an article about the treatment of troops who incur traumaic brain injuries while serving in Iraq, and there’s a long piece in the Washington Post about a soldier who was injurred in the line of duty but whose consequent disability not being compensated for by the U. S. army. (Thanks Alvaro and Greg.)