Harvey Cushing (1869-1939) is considered to be the father of modern neurological surgery. In the early part of the 20th century, he developed basic techniques and instruments for operating on the brain and, as a result, founded the discipline as a distinct surgical speciality. Before Cushing began his career, brain tumours were considered to be inoperable, and the mortality rate for any surgical procedure which involved opening the skull was around 90%. Early in his career, Cushing dramatically reduced the mortality rate for neurosurgery to less than 10%, and by the time of his retirement in 1937, he had successfully removed more than 2,000 tumours.

Cushing was a true pioneer who was not afraid to improvise to achieve the results he wanted. The main reason that mortality rates had been so high before Cushing was blood loss. The brain contains approximately 600km of blood vessels, some of which would invariably be broken when surgeons tried to gain access to the organ. In the majority of cases, patients therefore bled to death. Among Cushing’s significant achievements are the methods he developed to stem this blood loss. At first, he fashioned small hooks from pieces of wire that he found around the home. In the operating theater, he would place these improvised clips around arteries, so that if one were to break, he could minimize blood loss by quickly pinching the ends of the wire together. 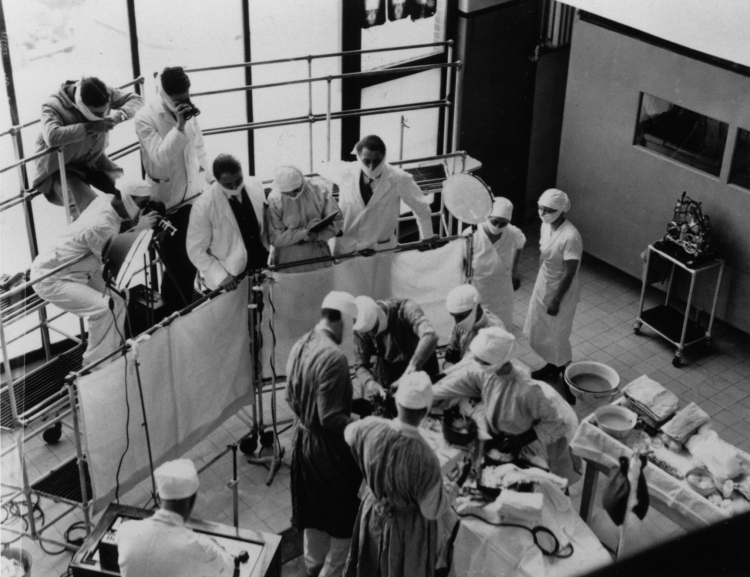 Subsequently, Cushing would use large arrays of artery clamps to reduce blood loss during his operations (as seen above). In 1911, he invented the first vascular clip. Also known as the “silver clip” or Cushing clip, it was designed for “placement on inaccessible vessels, which, though within reach of a clamp, are either too delicate or in a position too awkward for safe ligation.” However, Cushing never actually used the clip; ironically, the first person to use the device to clip an aneurysm was his former student and then competitor Walter Dandy, in 1937, the year of Cushing’s retirement. By excluding an aneurysm from the rest of the circulation, Dandy ushered in a new era of aneurysm surgery. 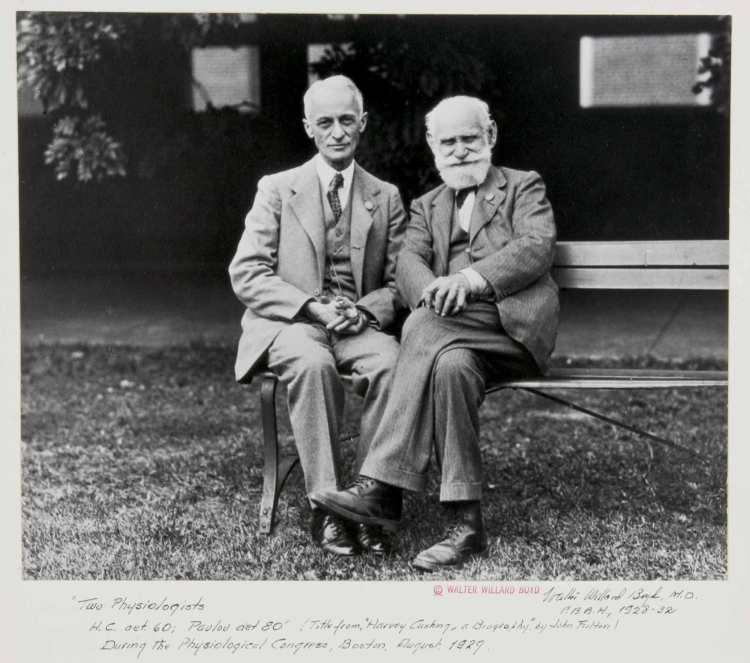 Cushing is today regarded as the greatest neurosurgeon of the 20th century, but his reputation was internationally recognized during his lifetime. At the height of his career in the 1920s, he was visited by other luminaries from around the world. One of these was the great British physiologist Sir Charles Sherrington; Cushing had previously travelled to Liverpool, U.K. in 1901, to assist Sherrington on the functional mapping of the motor cortex of great apes. Another was the Russian physiologist Ivan Pavlov, who attended the 13th International Physiological Conference in Boston in 1929. During his trip, Pavlov observed Cushing perform an operation and visited his laboratory, inscribing a piece of meat with Cushing’s new electrosurgical knife while he was there.

As well as being an outstanding surgeon and scientist, Cushing was an accomplished writer and a gifted artist. While at Johns Hopkins medical School, Cushing became close friends with Sir William Osler, who was the first professor of medicine there. Cushing later wrote a biography of Osler, for which the was awarded the Pulitzer Prize in 1926. His artistic talents were encouraged Max Brodel, a medical illustrator at Johns Hopkins. As a result, Cushing would make drawings immediately after an operation (above and below), which contained information about how the procedure had been performed, and soon became a central part of his surgical reports.

Cushing was also interested in the history of medicine, and frequented antique bookshops to acquire volumes for his collection. In particluar, he was interested in the work of Andreas Vesalius, the 16th century Belgian anatomist and physician who revolutionized medical illustration. Cushing died on October 7th, 1939, as the result of a myocardial infarction. At the time, he was researching a book about Vesalius. His heart attack was triggered while he was lifting one of Vesalius’s tomes.

9 thoughts on “Harvey Cushing: The father of modern neurosurgery”