In February of this year, Jacopo Annese, a neuroanatomist and radiologist at the University of California, San Diego, travelled to Boston to take delivery of a brain. For Annese, collecting brains is not unusual – he is, after all, director of UCSD’s Brain Observatory, which will eventually become a comprehensive library of brains donated by people who had neurological conditions such as Alzheimer’s Disease, as well as by healthy people of all ages. This time though, the brain he collected was very special: it belonged to the amnesic patient Henry Molaison,  who for more than 50 years was known in the scientific literature, and to every neuroscience and psychology student, as H.M.

In 1953, at the age of 27, Molaison underwent a radical experimental procedure involving the surgical removal of both hippocampi. The procedure was carried out in order to alleviate the debilitating epileptic seizures he had been experiencing since childhood, and although it significantly reduced the frequency and severity of his seizures, it also left him completely unable to form new memories. Soon after the operation, Brenda Milner began a comprehensive assessment of Molaison’s memory function, which she described initially in a landmark 1957 paper, co-authored by William Scoville, who performed the operation. (At the time, Milner was doing her Ph.D. under the supervision of the neurosurgeon Wilder Penfield, who pioneered the technique used by Scoville to identify the abnormal tissue in Molaison’s brain.) In the process, she laid the foundations of neuropsychology, and in the decades that followed, Molaison became the best-known and most intensively studied case in the history of neuroscience. 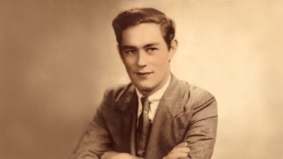 Molaison died of respiratory failure on December 2nd, 2008. About a year before his death, behavioural neuroscientist Suzanne Corkin of MIT, who had worked with Molaison since becoming a graduate student of Milner’s in 1962, began to make preparations for his brain to be preserved. She sent ice packs to his nursing home, which were kept frozen so that his head could be kept cool from the moment he died. Within hours of his death, Molaison’s body was taken to Massachusetts General Hospital. His brain was removed and placed in formalin. Two months later, it had solidified enough to be safely transported to San Diego. There, Annese performed several MRI scans, to obtain a final record of the brain in its intact state. The organ was then placed into a series of sucrose solutions of increasing concentration. This replaces the water in the tissue, reducing the risk that it will tear because of ice crystal formation.

Molaison has already contributed more to our understanding of memory than any other individual. Milner’s early studies showed that he could remember small amounts of information for very short periods of time, and thus the distinction between short-term and long-term memory was drawn. They also established once and for all that the hippocampus is essential for the formation of long-term memories. Molaison’s visual memory also remained intact, and he retained the ability to learn simple motor procedures. Now that he has died, Molaison will continue to provide further insight into the neurobiological mechanisms of memory. On Wednesday of last week – exactly one year after Molaison’s death – Annese and his colleagues began sectioning the brain. The 30-hour procedure generated some 2,600 coronal sections, each 70 micrometres thick, and was transmitted live on the internet. Although not particularly exciting, the webcast was hugely popular: at noon the following day, by which time the sectioning was in full swing, about 17,000 were watching online, and the website has since received more than 3 million hits. 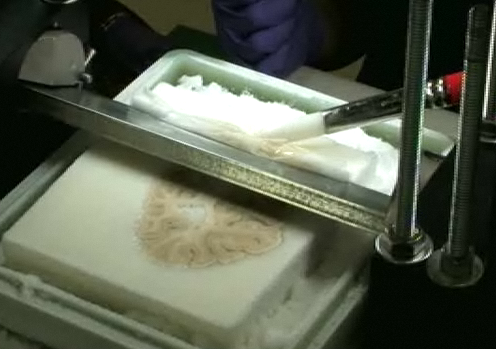 Some of the brain slices will be treated using a method developed by the neuropathologist Franz Nissl, which stains nerve cell bodies a deep purple-blue. These sections will then be mounted onto extra large postcard-sized glass slides, each of which will be photographed under the microscope at 20x magnification. This will generate a huge amount of data – each individual slide will require between 20- 40,000 “capture files”, which will be produced by an automated method developed by Annese. The data will be stored, managed and processed at the San Diego Supercomputing Center; here, the set of images from each slide will be pieced together to produce a single composite. The final result will be a digital, zoomable atlas of Molaison’s brain – the reconstruction generated from the MRI data obtained soon after Molaison’s death (below) will be the neurological equivalent of the Google Earth homepage, a starting point for navigation of the world’s most famous brain. All these data will be freely available online, and the remaining sections will be stored for future study, so that other researchers can request tissue samples, or ask to have specific brain regions photographed.

What might this project tell us about memory? Firstly, it could enable researchers to find strong correlations between brain and behaviour. Scoville believed that he had removed both of Molaison’s hippocampi in the their entirety, but subsequently it emerged that this was not the case. The detailed anatomical map that will eventually be produced will show the exact boundaries of Molaison’s lesions, and could therefore link the remaining parts of the hippocampus with the memory functions that remained intact. Comparison of Molaison’s brain with those of other amnesics, when taken together with slight differences in memory impairments, could provide information about the roles of different regions of the hippocampal formation. Finally, recent research has shown that long-term memories are transferred to the frontal lobes for permanent storage, so that their recall becomes increasingly dependent upon the frontal lobes, and less so on the hippocampus, with time. A detailed knowledge of Molaison’s neuroanatomy could therefore provide some insights into the neural pathways which connect the hippocampus to the frontal cortex, and which are involved in the transfer of long-term memories to the latter area. 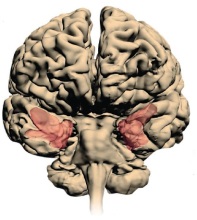 Reconstruction of H.M.’s brain, with the hippocampus shown in red.

There are, however, limitations to what can be learnt from the project. Although Molaison remained relatively healthy, he suffered several strokes prior to his death, which are likely to have caused some changes to his brain, and rhe MRI scans also revealed some damage to white matter tracts. Furthermore, although his seizures were significantly reduced following his operation, Molaison continued to take anti-convulsant medication up until his death, and these may also have caused changes. Nevertheless, his brain is a valuable addition to the small but growing collection of specimens at the Brain Observatory, and Annese hopes that the scores of researchers who studied Molaison over the years will use the new data to re-evaluate their hypotheses about his memory function.